Pip celebrates her first Christmas with Snoopy, who is celebrating his 47th Christmas with Laura! (Russ gave Snoopy to her for the first anniversary of their first date.)
Posted by Laura Erickson at 10:05 PM No comments:

My Aunt Rosemary's friend sent some outfits for Pip. Here she models one. These photos were taken on November 16, right after she was groomed. 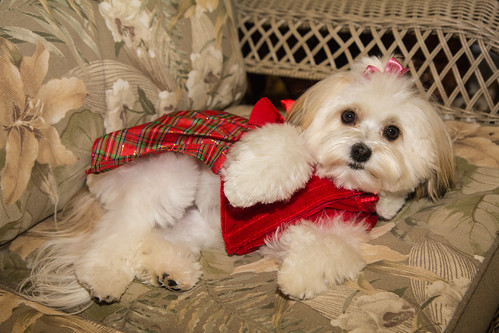 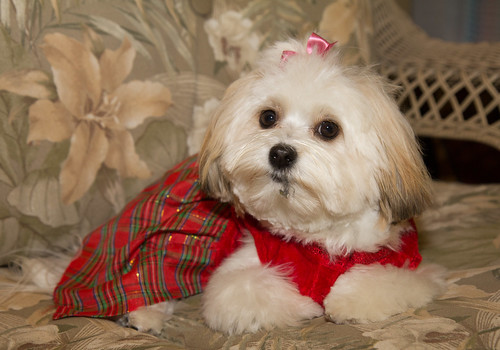 Posted by Laura Erickson at 1:26 PM No comments:

When I blather on and on about what a perfect dog Pip is, I'm obviously biased. But by just about anyone's standards, she really was amazing today, when she and I were guests on "The Larry Meiller Show" on Wisconsin Public Radio. (It was pledge week, and I was hoping people would pledge one for the Pipper. You still can, you know.)


She's heard me blather about birds before, so when she realized she wasn't going to hear anything new, she took a little nap.

She was such a good girl that when we were done, I had to reward her with our favorite food, at the Rocky's in Arlington, WI.

We brought our pizza to Goose Pond, but I almost forgot to eat it. Our eBird list included:


That was astonishing for December 9. But I don't know if I was more surprised by the birds or by Pip's reaction to them. She was transfixed! A small plane went by, and the birds started calling loudly—I thought the whole mass of them were going to explode in flight, but they just chattered for a minute or so and settled down again. Throughout the time we were there, even when they were just calling quietly, Pip could not pull her eyes away.


I finally got her to look for just a moment before she turned back around. She didn't even want pizza! She finally gobbled down the piece of sausage I saved for her, but only after we drove away from the swans. I guess I know what her favorite bird is now.

What a splendid day, and all because of Larry Meiller. I hope you pledged!!

Posted by Laura Erickson at 9:43 PM No comments:


Pip and I get her favorite foods from a local shop, Matilda's Dog Bakery & Boutique, right in our own neighborhood. Every year, Joanne Elliot, the owner, arranges with another friend of mine, Lisa Johnson (Pupparazzi Companion Animal Photography) to take photos of pets with Santa Claus. So Pip and I of course had to show up yesterday.

There may be a dog somewhere who is as wonderful as Pip. But there couldn't be a more wonderful dog anywhere.
Posted by Laura Erickson at 12:11 PM No comments:

On the first day of spring this year, I picked up an 11-week-old Havana Silk Dog puppy named Pip, who has been my constant companion ever since. She’s traveled 15,200 miles in my car, traveled to 13 states, attended 11 of my speaking engagements, and been along as I saw 241 species, which are counted on her official “life list.” She’s wonderful company, and welcome just about everywhere I go.

What birds has Pip seen? I keep her life list via eBird, and keep the list fairly well updated--I'm putting a link here but it's also always on the sidebar of this blog. She got lots of cool birds when Russ and I brought her to Florida in September--birds such as Snail Kite, Wood Stork, Anhinga, and Florida Scrub-Jay, but we missed some important ones such as Roseate Spoonbill and Painted Bunting, so oh, darn--I'll have to bring her back again. I did a program in Erie, Pennsylvania, on November 20, and from there went to New York City to visit my daughter. In Pennsylvania, Pip added Red-breasted Merganser, Bonaparte's Gull, and Tundra Swan. I felt a little like I was cheating with the swan because she was actually indoors when I went out to see a flock flying over, but the next morning we saw a few flocks from the car. We got Monk Parakeets in Katie's neighborhood in Brooklyn.

I’ve taken every dog I’ve ever owned on birding trips. I saw my very first chickadee the first time I went birding, on March 2, 1975, with our dog Scout—a springer-lab mix. My golden retriever Bunter and my Bichon Frisé Photon both spent many, many hours in the field with me--I think I must have seen at least 400 species with Photon over the years. Pip is tinier—at 11 months, she weighs 6 ½ pounds, half of Photon's ideal weight—but so far she hasn’t needed to be carried for her own needs except when Russ and I brought her to Florida, where nasty thorns kept digging into her paws. I do pop her into a shoulder bag when we’re on beaches with any shorebirds about, but that’s to protect the birds, not Pip.

When I’m out birding, I see lots of big dogs in the field, but not many tiny foo foo dogs like Pip. I get irritated when any dog crashes through the woods, especially in spring and summer when birds are nesting—I don’t think most people, including birders, realize how many songbirds, including thrushes and warblers, nest on or very near the ground, where their nests can so easily be trampled by even the sweetest dog.

My golden retriever Bunter could be entirely trusted off leash—even if she spotted and started chasing a deer, she’d instantly come if I called—and she was trained to stay pretty much on the trail or road. I see very few dogs in the woods who are so well trained to come on call, much less to stick to human-made paths rather than crashing into natural habitat. I try not to be judgmental, remembering how hard it was for me to control Scout if she started chasing anything, but the US population has increased 50 percent since 1975, and natural habitat has decreased even as more and more people crowd into the remaining good spots, so we all need to be more conscientious if we’re to survive as a civilized society.

Pip has been the easiest to train of all our dogs except, maybe, Bunter, but I never allow her off-leash outside of our yard. She’d be easy pickin’s for all kinds of natural predators, but the clear and present danger is from other dogs. I’ve had mostly large dogs, and love them, but when I’ve been birding, I’ve been jumped on and even knocked over by too many wet, muddy dogs, including when I’m lugging my long-lens camera and binoculars or my tripod and scope, to enjoy seeing even the friendliest off-leash dog approaching me. Worse, two different black labs and one other big dog, all whose owners swore they were friendly, attacked Photon, one pretty badly. Pip, weighing half as much, wouldn’t have come through those experiences as well.

Bunter was the perfect dog when I was in my 30s and had little children—she actually helped Katie and Tommy learn to walk. Many large dog breeds have a lot of wonderful qualities, and duck and upland game bird hunters and people with sled dogs could hardly manage with a 6-pounder like Pip. But I knew my own days of large-dog ownership were drawing to a close when Bunter had a stroke, back around 1994. I was home alone when she collapsed in our upstairs hall, and I simply could not pick her up in any way that wouldn’t have hurt her more. Fortunately, Joey came home from middle school within minutes, and he helped me get her into the car, and then into the vet’s office. Bunter fully recovered and lived a few years more. When I lost her, a little piece of my heart died, too, but I knew I could never again manage a large dog.

Fortunately, little dogs turn out to be even more ideal as birding dogs—even before they were well trained, I could put Photon and Pip on a long retractable leash, hooked to my belt with a carabineer. Photon’s biggest flaw was her deep desire to chase deer, but even if I wasn’t paying attention when she spotted one and lit out at top speed, she couldn’t reach the deer or pull me over trying. Like most dogs, Pip likes to run ahead of me, but she figured out how long the leash was from the very start, and always slows down as she reaches that length, so she never tugs at me at all—an excellent quality when I need to hold steady to photograph a tricky bird. Her long, soft fur needs brushing after a day in the field, especially if she went swimming or rolled in the sand or dirt, but that’s a relaxing way to spend a few minutes in the evening.

I keep that life list for Pip even though it’s obviously meaningless for her. But oddly enough, she has actually noticed and paid attention to most of the birds on that list. I’ve never before had a dog who watches birds flying overhead, sits at the window watching birds at our feeders, or stands next to me on a trail watching redstarts flitting about in nearby shrubs. She’s taken to chasing squirrels in our yard, but so far seems to understand she’s not supposed to chase birds anywhere. So from the time she jumps in the car until we get home, she’s nothing but pleasure to have along when I’m birding.

Next year I’m going to be going to California on a Minnesota Birding Week trip with Kim Eckert, to Hog Island in Maine as an instructor for a couple of Audubon Camp classes, and maybe to Uganda—I’ll have to leave Pip home for all of these adventures. After so many months having her at my side, I’ll feel bereft, like the Lone Ranger without Tonto, Nick Charles without Nora, or a spring without birds. But for most of my birding from now on, my plucky sidekick will be there with me. Who could ask for more?

Posted by Laura Erickson at 9:51 AM No comments:

Email ThisBlogThis!Share to TwitterShare to FacebookShare to Pinterest
Newer Posts Older Posts Home
Subscribe to: Posts (Atom)
It is a truth universally acknowledged, that a woman in possession of a pair of binoculars must be in want of a puppy.