Pip the Birding Dog has been spending a lot of time in the field with me in the past three weeks. She still has a lot to learn—after all, she’s not quite 5 months old. It was hard for her to learn not to bark at people and dogs, though she seems to be getting the hang of that. It’s also been tricky for her to figure out that when you’re on a retractable leash and your birding partner (who controls the leash) walks on one side of a tree or other obstacle, it’s a really good idea for you to walk on the same side of that obstacle.

But for a young puppy, Pip is remarkably calm and well mannered, and is quickly learning the rules. It may have seemed rather crazy to try to do any kind of a serious Big Day with such a novice, but I had to start sometime, so on May 21, I took her out with me. I’d been out of town on the 16th—the day set aside as the Hawk Ridge Birdathon, when people do Big Days as a fundraiser for Hawk Ridge Bird Observatory. That day turned out to be ideal, with a migration fallout in Duluth and plenty of birds seen elsewhere in St. Louis County, too especially at the Sax-Zim Bog. May 21 was far less ideal: sunny and very windy, so not only were birds not gathered at migration stopover points; the ones that were around were much quieter than normal.

To make things worse, I had hurt my back the day before, and could hardly move when I got up until the extra strength Tylenol kicked in, so not only did we not get out by midnight, or at least 2 or 3 am, the way a respectable Big Day should begin—we didn’t set out until 8 am—ridiculously late for catching all kinds of species.

I’d set the modest goals of getting at least 100 species, which is usually fairly easy anytime in the second half of May, maybe even with a puppy along; and of getting Pip’s life list up to 175, which would mean seeing at least 13 species I’d not seen with her before. We started out with 21 species from my backyard, counted before 8 am. My Red-bellied Woodpecker didn’t show up, so we entirely missed that one. I thought the Canada Warbler we did see in my yard might end up being the only one of the day, but we saw several more of them elsewhere—this has been a big year for them. So those first critical hours, we didn’t get anything we actually needed.

We started at Park Point. There weren’t many warblers—the weather was too beautiful for them to stick around—but did run into some birding friends. That’s how I got the only photo of Pip and me for the day and how we saw our only Marbled Godwit, which was wandering around the airport. For the first time in decades, people had seen a pair of Piping Plovers on the beach this year, so I took Pip out there. I kept her leash very short on the boardwalk and then carried her on the beach itself, and after a quick but careful scan, we left without seeing them. It would hardly be worth adding a cool species for me if by doing so I was jeopardizing a possible nesting.

Next we went to the Western Waterfront Trail. I thought we could probably race through there, but it turned out to be rich with warblers, so we took our time. In that one spot we saw 58 species, including 16 different kinds of warblers. I got some of my best pictures ever of Wilson’s Warblers, which happened to be as abundant as redstarts and Yellow Warblers that day. It was already lunchtime, when birds are usually quiet, but a Sora started calling from the marsh, and that inspired two more Soras and a Virginia Rail to answer. I also had an unexpected Marsh Wren and a late female Common Goldeneye there.

We didn’t leave the Western Waterfront Trail until 1:30, and had to buy gas on the way to the Sax-Zim Bog (another sign that this was not a true Big Day—it’s important to have the car fully gassed up before starting out on a real competition). We didn’t have a lot of time to cover the area. We went to Nicholls Lake and Stone Lake, and along Arkola to Owl Avenue, and then worked our way back to 133 and home—covering so little ground that we even had to skip Admiral Road, and still didn’t get home until after 9 pm. But in the bog we managed to add some excellent species, including Black-backed Woodpecker, Le Conte’s Sparrow, and Black-billed Magpie. We also came upon a ridiculously tame Rock Pigeon that was clearly imprinted on humans on Stone Lake Road. That was Pip's favorite bird of the day. 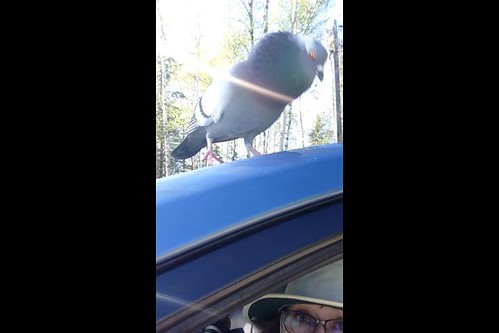 Pip noticed quite a few other birds, and although she obviously doesn’t care about identifying them herself or amassing a long list, she’s at least as conscientious and knowledgeable a birder as some people who have attended field trips of mine. Her life list may have no value for her, but I’ll always treasure being able to look back on the birds I’ve seen with her along.

We didn’t do nearly as well as we should have, but the day was hardly a bust. We ended with 116 species—way better than I expected at the start—and added 21 species to Pip’s life list. I’m lacking every possible skill as a fundraiser, so I donated $100 to Hawk Ridge myself, but kind people donated an additional $165 to Hawk Ridge, to support our little effort. Next year maybe our little Great Expectations team can be real contenders again.

Posted by Laura Erickson at 6:04 AM